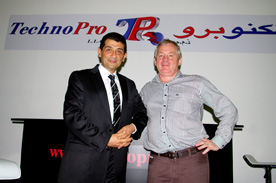 SGM Lighting and Middle East-based giants, TechnoPro, have agreed a new distribution deal that takes the relationship which the two companies have enjoyed for many years to a new level.

SGM CEO Peter Johansen and TechnoPro founder and Chief Executive Nabil Bourgeili confirmed an agreement to extend the brand’s territorial representation far beyond the UAE, during the PALME Middle East show in Dubai this month.

Under the new ownership of Danish entrepreneur Johansen, the former Italian lighting company is now focusing exclusively on LED fixtures. In fact the launch of next generation LED effects into the Middle East market formed a dynamic component of TechnoPro’s massive 1000 sq metre display at PALME – making them easily the largest single exhibitor at the show.

Said Peter Johansen: “We are delighted to be partnering again with Nabil, as TechnoPro looks to move further into LED technology and the architectural market. We recognise that Dubai is a vital hub for reaching not only the Middle East but beyond, and with bases in Dubai and Qatar, TechnoPro is without doubt the predominant player in the region.”

Nabil Bourgeili responded: “We have enjoyed a successful relationship with SGM for a number of years but this will bring us much closer to the brand.  We will provide fully-supported distribution in Central Asia and the Near East, including Turkey, Kazakhstan and parts of the old USSR, as well as North and Central Africa. As the largest production company in the Middle East we are well qualified to do this.”

He continued: “What excites us about SGM’s new portfolio is that some of these products are completely unique, which will find application not only in the entertainment market but in the architectural world, including daily activity environments such as shopping malls and attraction parks.

“I have a lot of respect for the direction SGM is now taking with its products, and am very excited by the potential that this offers.”